Hello!
We may have mentioned that we (Jonny and myself) undertook a secret mission at the end of September. The fruits of our labour can only really be revealed at the start of January - (unless you happened to be there, which being as nyckelharpa players mostly visit this site, is quite large). We finished the mission and at once went and re-recorded Fikavalsen and set it to release in good time before the big day. (3rd January, 8pm BBC1) So here is one of the tunes that hopefully (unless the scene has been cut!) you should recognise. Available for digital download in all good digital download stores, or just set your spotify on repeat.... 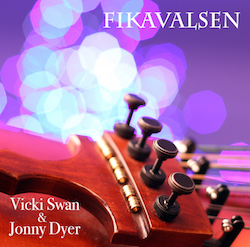 In Swedish 'fika' is to have a cup of strong coffee with a cinnamon (or any kind of) bun. As often as possible. It is a Swedish institution to stop for fika. Swedes drink really strong coffee. This waltz was written to be calming when you've had too much caffeine.

Back in September 2016 Jonny and I were called in to take part in some filming for the BBC. We ended up using this tune for one of the themes. We got home and re-recorded it (it's on Gleowien, which is now sold out) and we've released it in readiness for January 3rd. Once the episode has aired we'll add to this page! In the meantime we're keeping very quiet, except for the music! Enjoy that and watch out for it (unless it got cut!!!) January 3rd BBC1 - 8pm. (That's a tiny hint!)

This entry was posted in news. Bookmark the permalink.