Skip to content
How long until Harpas at Halsway 23?

We are so excited to be able to offer the line up that we were supposed to have back in 2020!
Tutors: Johan Lång, Björn Kaidel and Vicki Swan 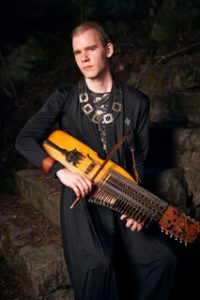 Johan Lång
After last year and any popular demand we are so excited to have the amazing Johan Lång back again on the teaching team!
Johan Lång was born and raised in Uppsala, Sweden, and at the age of 16 he became fascinated by the traditional Swedish instrument called ”nyckelharpa” and the soundscapes it is able to produce. As a ‘Riksspelmanʼ he is an acknowledged practician of traditional Swedish music and has earlier studied at the Royal Collage of Music in Stockholm. Today he’s active as both a musician and a teacher. In Eir, Johan uses the ethereal sound of the nyckelharpa to illustrate different ambiences, be it the wind caressing the top of a mountain or the frigidity of a winter’s morning. https://eirmusicduo.se 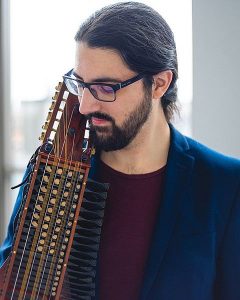 Björn Kaidel
Björn is a passionate folk musician from Germany. When he met the nyckelharpa for the first time, he immediately fell in love with the instrument and dove deep into its tradition and playing techniques. He has studied nyckelharpa in various workshops and since 2015 he regularly travels to Sweden and receives private lessons from Josefina Paulson. He mainly plays Swedish, German and modern Bal Folk music. Björn is involved in the scene of folk musicians that is reviving almost forgotten German folk music by playing tunes from old manuscripts from the 17th to 19th century that are slowly being rediscovered in libraries and private collections. He is a founding member of Akleja (www.akleja.de), Airu (www.duo-airu.de) and Fior (www.fiorfolk.de), with which he has played concerts and dance evenings all over Europe (e.g.  in Germany, Sweden, the Netherlands, the Czech Republic, Austria and Switzerland). Björn loves to teach and is regularily booked for ensemble and nyckelharpa workshops in Germany and abroad. 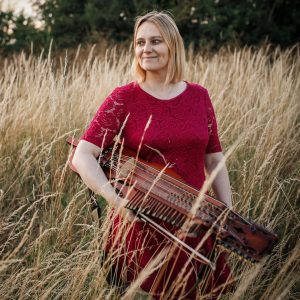 Vicki Swan
Vicki studied at the Royal College of Music on the double bass. She also plays the various types of bagpipes, flute, recorder, piano and nyckelharpa.  On leaving music college Vicki started down the long path of folk music and was only seen on rare glimpses back in classical orchestras. You’ll find Vicki now inhabiting the troll ridden forests on the hunt for new and exciting tunes from the näcken. Vicki plays not only the standard 3-row modern chromatic, but also the 1408 sienaharpa, the 1526 moraharpa, the 1700s kontrabasharpa and the 1800s silverbasharpa. Over the pandemic Vicki has worked tirelessly on a Virtual Music Room to try to help isolated nyckelharpa players remain motivated and focussed on playing and learning. Chances are after all this time alone at home she won’t stop talking at the Halsway weekend! Seeing as this is Vicki’s website we don’t really need a link, but here is one to Vicki Swan & Jonny Dyer:
http://www.swan-dyer.co.uk

Sunday night supper B&B available (must be booked in advance):
• £45 – I need to check this price